How many times have you gone to a casino to ride a log flume? If you haven’t been to Buffalo Bill’s Resort and Casino in Primm, Nevada, then your answer is probably “never.”

Built in 1994, Buffalo Bill’s Resort and Casino is a 16-story Western-themed hotel and casino at the Nevada/California border in Primm, Nevada. One thing that made Buffalo Bill’s unique as a casino was its themed rides, including the Adventure Canyon Log Flume and the Desperado roller coaster, the tallest in the United States in the 1990s.

Buffalo Bill’s Resort and Casino was part of three hotels and casinos that were constructed by Gary Primm and the Primm family at what was then State Line, Nevada.  Constructed first was Whiskey Pete’s in 1977 which was named after Pete MacIntyre (AKA Whiskey Pete) who originally owned the land in the early 1900s. The claim to fame for Whiskey Pete’s was displaying in the lobby the original car that Bonnie and Clyde were in when they were killed. Next was Primadonna Resort (later named Primm Valley Resort). The final was Buffalo Bill’s which had 592 hotel rooms, eventually expanding to 1,242 rooms. The influence of the Primm family was so strong at State Line that it was renamed Primm, Nevada. 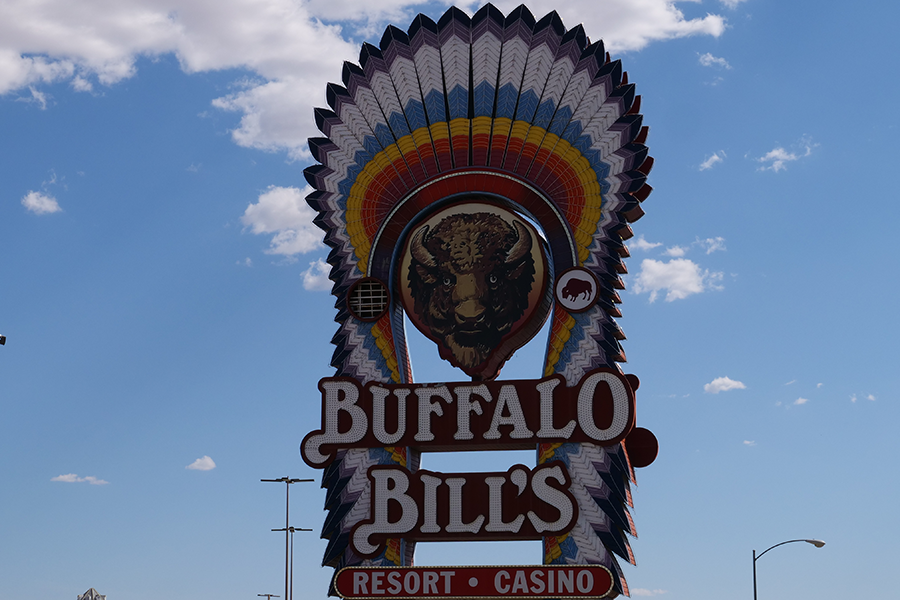 Buffalo Bill’s was the most unique of the three buildings due in part to its Western theming and theme park-style rides. The main attraction was the Desperado hypercoaster built by Arrow Dynamics which went bankrupt a few years later. Opened on August 11, 1994, the roller coaster was classified as the tallest in the United States at 209 feet and second tallest in the world. Guests loaded on Desperado inside the casino. The coaster would then climb a lift that would go through the roof of the casino with the rest of the ride taking place outside. At one point the ride intersected with the log flume and a train, creating some additional visual fun. 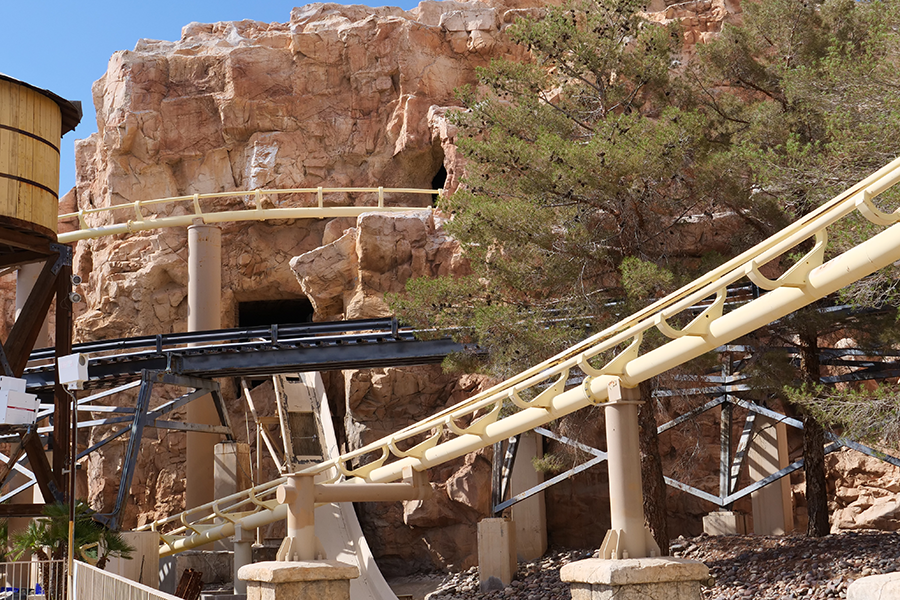 This is the spot where the coaster, flume, and train would come together (photo by Theme Park Magazine)

When it opened in 1994, the Adventure Canyon Log Flume became the first interactive log ride in the world. It was also the first to travel through a casino.

As riders boarded the log for Adventure Canyon Log Flume, inside the casino, they were provided with electronic guns to use during the ride. The flume ride quickly exited the casino to begin a climb outside followed by a quick 35-foot drop with close-up views of the Desperado roller coaster. The flume rounded a corner where it became a “floating shooting gallery” type experience as it entered the casino for several minutes of Old West scenes and shooting fun. Some of the things gun-slingers would shoot at included graves, miners, desperados, and outlaws. And some of them there outlaws would shoot back.

As the years went by, the ride started to show its age. At some point, over a decade ago, the shooting element was eliminated despite the electronic targets still being plastered everywhere. Electronic guns falling in the water or being stolen by guests were a problem that partly contributed to the interactivity being eliminated for good.

Buffalo Bill’s other problem was closing down the log ride with little to no notice, sometimes for long periods. There was a major inconsistency to when guests could experience the log flume which aided to a lesser desire to visit Buffalo Bill’s. At one point the ride was only open on weekends and sometimes it was down for an extended period of weeks or months without explanation.

Here is a video by Parkineer that was taken of the ride in 2019, well after the shooting element was removed, but the targets remained:

Due to the COVID-19 pandemic, Buffalo Bill’s Resort and Casino closed in March 2020, possibly for good. The Adventure Canyon Log Flume ride, along with others, had been mostly closed for several years prior.  While there have been some rumors of a possible reopening of Buffalo Bill’s in 2022, the likelihood looks extremely slim. And the chances of the Adventure Canyon Log Flume reopening look even slimmer. When Theme Park Magazine visited the area in September 2021, the log flume was in major disrepair.  The rest of the property was in bad shape too, something reflected in Yelp reviews leading up to the COVID-19 closure. 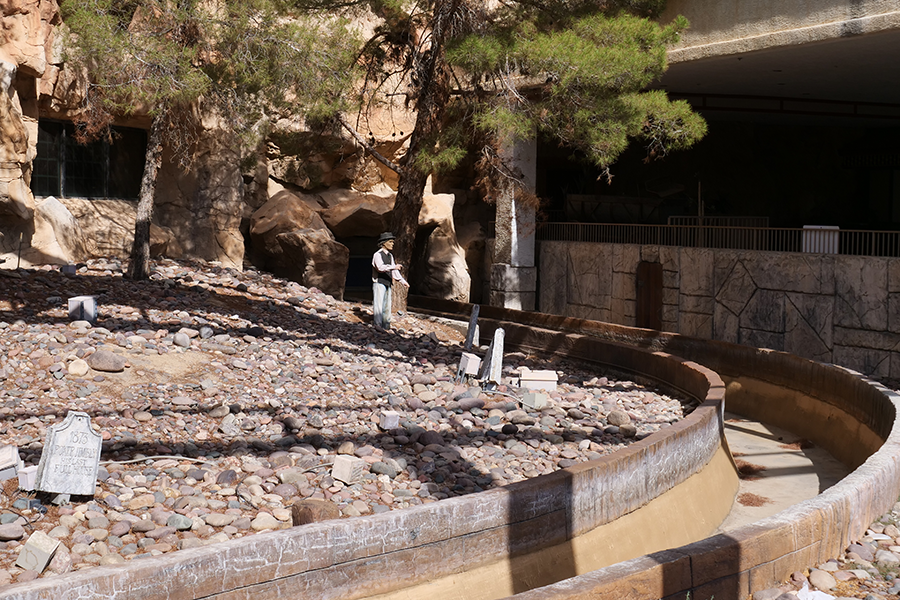 And there you have it. The wonder of the old west has given away to tumbleweeds and empty parking lots. And one of the more unique log flumes around is now a gathering of cracked cement and dust. Hopefully, the Adventure Canyon Log Flume ride is given new life at some point, but the chances of that are likely the same as hitting the jackpot on one of Buffalo Bill’s non-operational slot machines.