On June 2, 2021, Disney held a live grand opening event for its new Avengers Campus at Disney California Adventure Park in Anaheim, California. The new training grounds for superheroes opened to the public on July 4. 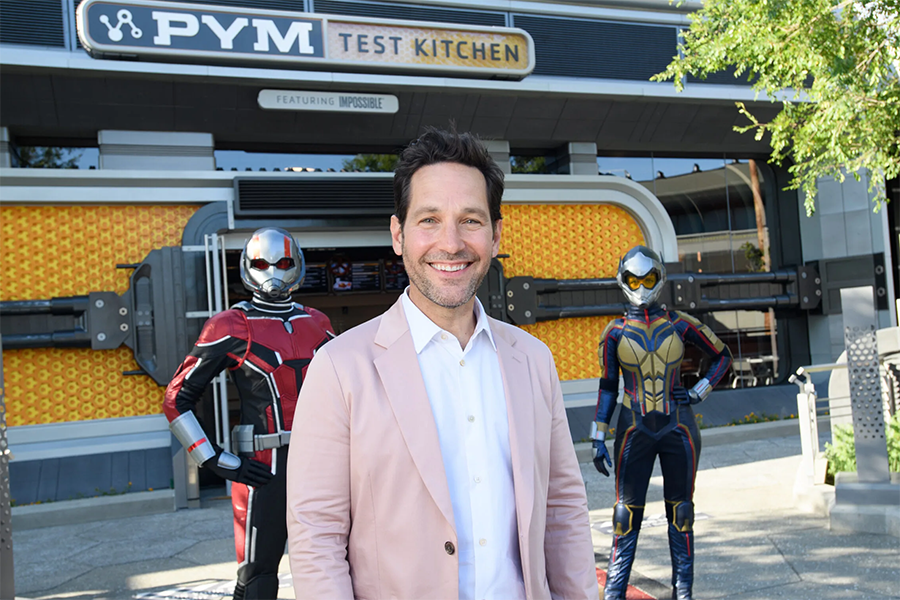 Ant-Man Actor Paul Rudd was one of several celebrities at the opening event of the Avengers Campus. (Photo: Richard Harbaugh/Disneyland Resort)

The new themed area is located on six acres of land where the Guardians of the Galaxy ride (formerly Twilight Zone Tower of Terror) is located. Disney closed A Bug’s Land on September 4, 2018, and some of Hollywood Land to make room for the campus.

Work on Avengers Campus began in 2018 and was slated to be opened in July 2020. However, the COVID-19 Pandemic caused the opening to be postponed.

“Avengers Campus will be a place where fans and guests can finally step into the universe they love, and stand alongside some of their favorite heroes,” said Dave Bushore, vice president of Franchise Creative & Marketing for Marvel Studios in a press release. “The optimism inherent in Avengers Campus captures the diversity, power and teamwork these extraordinary characters possess, and now they come together to unite people from all over the world under one guiding principle: We are stronger together.” 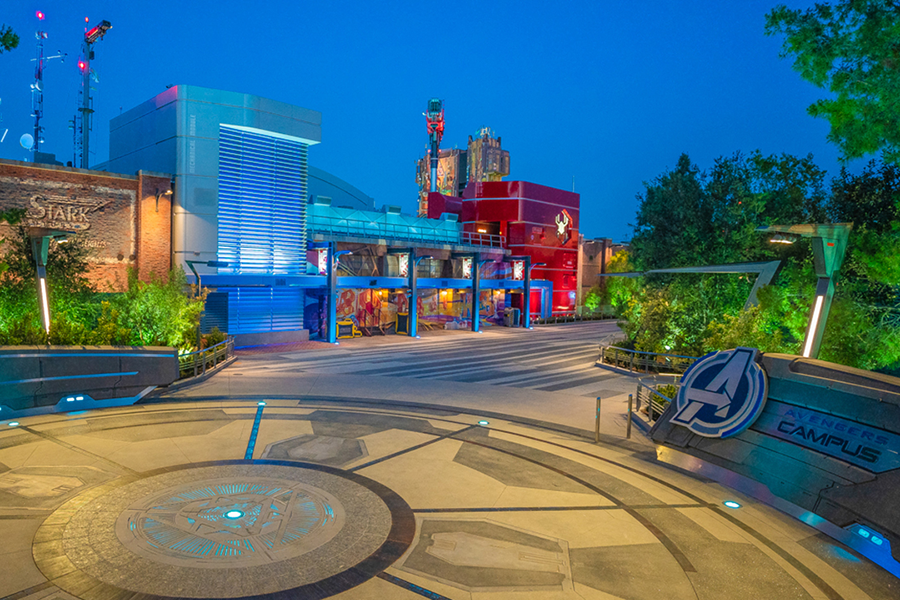 As a “campus,” the new Avengers Land will allow guests to train as superheroes and take on some superhero challenges, like helping Spider-Man in the WEB SLINGERS: A Spider-Man Adventure ride.

Guests put on special glasses for the new Spider-Man ride using their wrists to sling spiderwebs at Spider-Bots that are replicating in record numbers.

Avenger’s Campus is made up of two rides; WEB SLINGERS: A Spider-Man Adventure and Guardians of the Galaxy: Mission: BREAKOUT which has been in the Disney California Adventure Park since 2017.

Guests can also explore the ruins of an Ancient Sanctum where they can be trained by Doctor Strange in the mystic arts.

Guests will run into many other Superhero characters at Avengers Campus including Captain America, Spider-Man, Black Panther, Black Widow, Iron Man, Ant-Man and the Wasp, Thor, and the mighty Warriors of Wakanda. 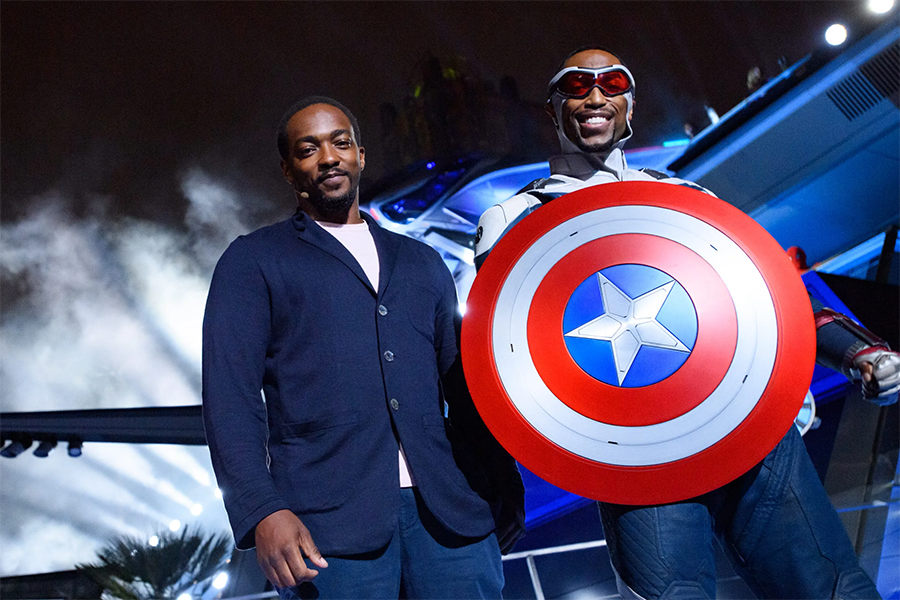 Anthony Mackie and Captain America were part of the opening ceremony for the Avengers Campus. (Photo: Christian Thompson/Disneyland Resort)

Guests may be selected to train in The Disciplines of the Dora Milaje with Okoye. Only the best will become loyal bodyguards of the Black Panther.

At the Pym Test Kitchen, guests can order food that uses “Pym Particles” for growing or shrinking the food. Guests can even watch this magic unfold in front of them with the transformation of pretzels from regular size to tiny or quantum. 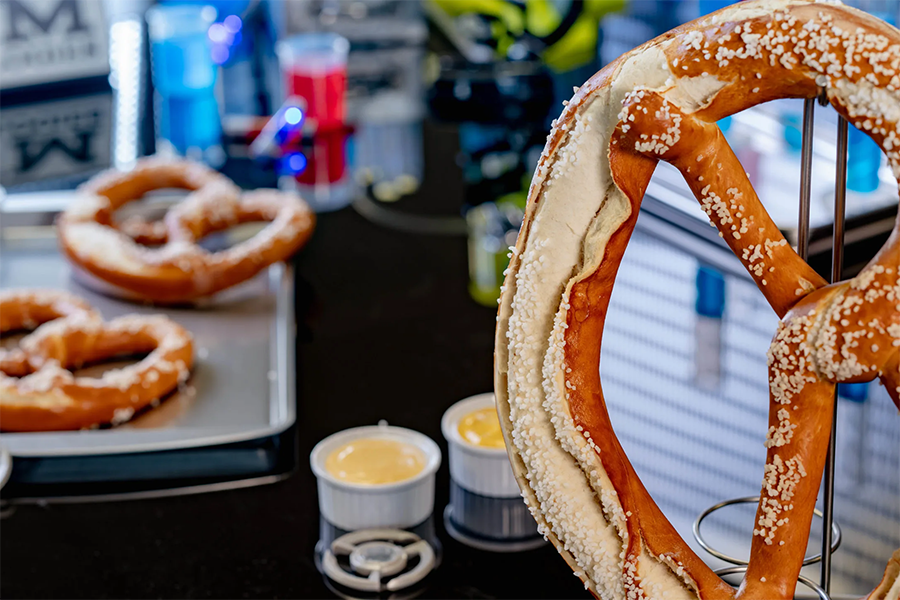 Guests can also order shawarma from a Shawarma Palace food cart on the campus.

For merchandise, there are two places guests can buy novelty items: WEB Suppliers and The Campus Supply Pod.

Disney also unveiled the uniforms that “campus representatives” will be wearing in the different lands (see Theme Park Magazine’s 30 Second News Video on this reveal).

So will Walt Disney World see an Avengers Campus? Not likely, due to licensing rights. According to an article by the Tampa Bay Times:

“In 2009, Disney bought Marvel Entertainment for $4 billion in cash and stock. But it did not obtain all the licensing rights that Marvel had signed away before then. That’s why X-Men remained a Fox movie property, and Spider-Man was still the property of Sony. And that’s also why Disney does not have the rights to use the Marvel name and characters at Walt Disney World.”