One of Walt Disney’s original rides at Disneyland, when it opened on July 17, 1955, was “Snow White and Her Adventures.” Guests boarded a “mine cart,” which took them on a journey through the mine of the seven dwarfs and into a scary encounter with the evil witch.

How scary? The sign outside of the ride warned: “Beware of the wicked witch! This attraction contains scenes in which the witch appears. Small children may be frightened.”

When the Snow White ride originally opened, you didn’t see Snow White.
That’s because Walt’s concept was that you were experiencing the story through her eyes.

Walt Disney’s basic philosophy of ride development calls for rides to be updatable and upgradable. This has resulted in several iterations of the Snow White ride over the years. Some changes were minor, and some, like “Snow White’s Scary Adventures,” were major. Completed in the early 1980s after a two-year closure, “Scary Adventures” added track and all-new scenes.

On January 7, 2020, “Snow White’s Scary Adventures” was closed to undergo another major transformation. The ride was imbued with a more enchanting and cheerful vibe.

“The Snow White attraction has such a rich history. We wanted to take into account the beautiful scenic work that has always existed and retell the story in a special way. We believe guests will enjoy this sweet storyline in a stunning experience.” 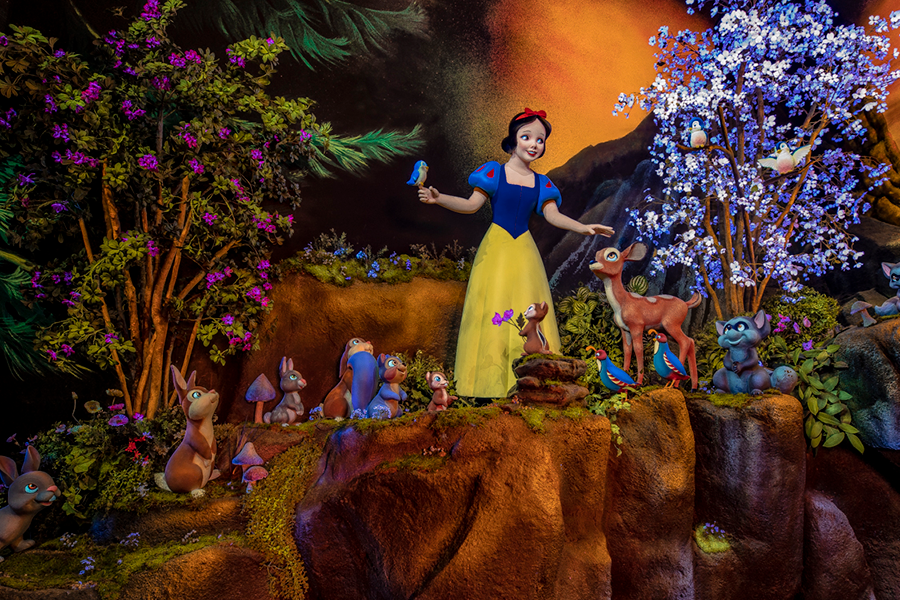 Disney noted the following enhancements to the ride:

Robert Niles of Theme Park Insider conducted an excellent interview with Dave Caranci, manager of creative development for Walt Disney Imagineering, about the ride. In the interview, Caranci says about the ride’s imaginative beginnings:

“We had an intern at the time [David Borning] who had a passion for Snow White. Because it was coming upon the 80th anniversary of Snow White, he went home and built a little model and then came back to the office and really sold us on the idea of, what if we enhance Snow White and we did some cool new things to it?”

“Snow White’s Enchanted Wish” differs from earlier ride versions in that it attempts to tell the full story of Snow White. The ride is like diving into the pages of a Snow White novel. Book pages come to life and riders get to “experience” the story.

When Disneyland reopened from the COVID-19 Pandemic closure, Snow White’s Enchanted Wish was there to great guests and remind them why Disneyland is “the happiest place on earth.”