David is a creator of magical experiences, most recently assisting Walt Disney Imagineering as a creative leader for Snow White’s Enchanted Wish ride at Disneyland.

TPM: David, thank you for agreeing to share your insight via this interview. To start, you are a “Themed Entertainment Artist.” Can you explain, exactly, what that is and what it entails?

David: My combination of technical and creative skills doesn’t fit neatly into a standard title, but “Themed Entertainment Artist” encapsulates what I do best. My core mission is to realize the emotional potential of physical environments. Every aspect of my work can be tied back to supporting those narratives and emotional journeys.

TPM: What originally sparked your interest and passion for theme parks?

David: My first visit to Disneyland was when I was four. I remember being captivated by the whole experience, particularly Peter Pan’s Flight. I immediately tried to recreate the Neverland model you fly over in the ride out of clay when I got home. Later, I set up dark rides with moving LEGO figures and cardboard sets and would push friends through on rolling office furniture.

My passion for live theater also informs my work. I pursued acting early in my career and that hands-on experience of live storytelling inspired my approach to themed entertainment. If everything lines up just right, theme park guests should be swept away by an immersive experience above and beyond passively watching a story unfold from a seat in a theater. 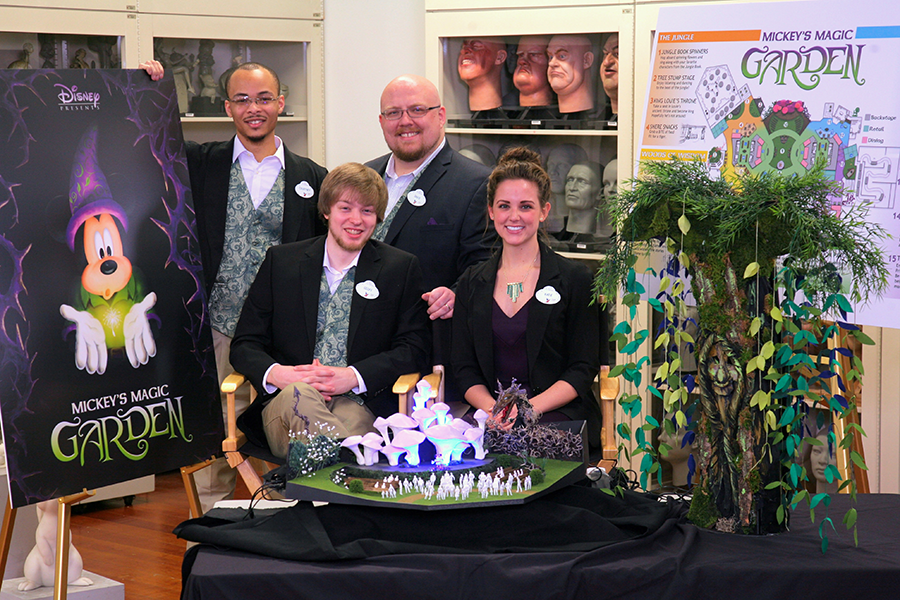 David: Growing up in Seattle I always wished that Disneyland was closer in proximity, so getting the chance to design a traveling Disney park, like Mickey’s Magic Garden was a dream come true. We designed multiple lands, attractions, dining experiences, and shows. I built a scale model of the center of the park with integrated special effects including a working Grandmother Willow and dragon animatronic mockup.

For our live presentation at Walt Disney Imagineering in Glendale, I remotely activated the models from the stage and they sprang to life with a little show choreographed to music. We got a standing ovation. I was so excited to be there. It’s nearly impossible to visit Walt Disney Imagineering and to me, it was like winning a golden ticket to Willy Wonka’s Chocolate Factory. 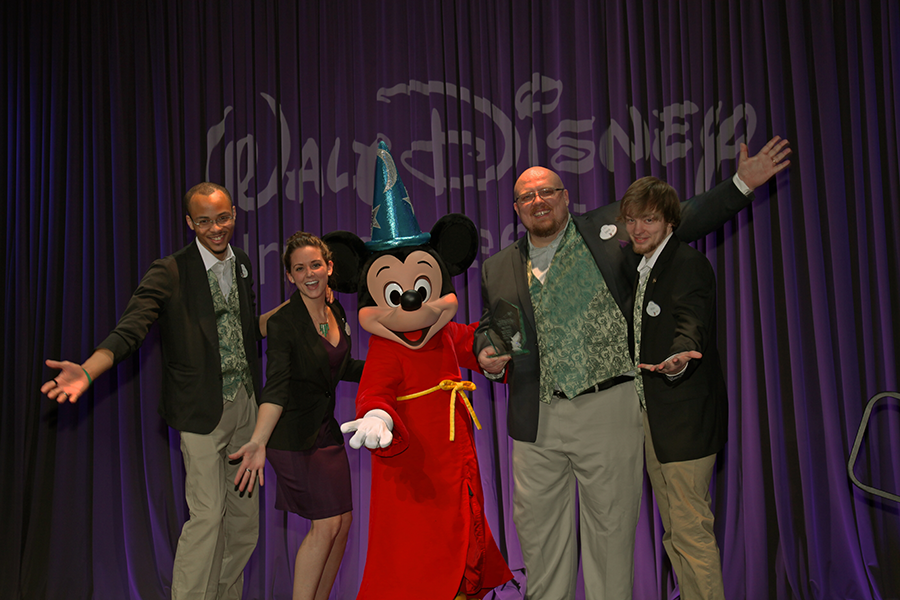 TPM: In 2016, you had an amazing opportunity to be an Anaheim Studio Creative Intern for Walt Disney Imagineering. How did that opportunity arise and what did you learn from it?

David: I interviewed for the internship during the final round of the Imaginations competition. I learned so much during my yearlong internship working with fantastic mentors and understanding the ins and outs of design, fabrication, mockups, vendors, and how rugged things need to be in a real-world theme park environment. Because we worked right at the park at the WDI Anaheim office, our team was able to collaborate on location with our operations and maintenance partners. I got to see how things work behind the scenes from multiple perspectives.

TPM: On your Website, you say, “Ever since my first visit to Disneyland I’ve seen a future in expanding the ability of theme parks and rides to create more complex and emotionally moving experiential narratives.” Describe some of the things you see in this future.

David: I think there is still a lot of untapped potential. I hope to see a growing number of theme park experiences that explore a full range of emotions, even the more difficult ones to tackle. Ever since I can remember I’ve wanted longer and more elaborate rides.

TPM: What is your favorite theme park ride ever and why?

David: My favorite attraction changes over the years. If you had to hold me to one I’d say Pirates of the Caribbean at Disneyland. It has great storytelling, music, characters, a variety of environments, and a little thrill element. It also broke so much ground when it debuted in 1967 and pushed the limits of what was possible in a themed attraction. Other favorites include the Haunted Mansion, E.T. Adventure, Indiana Jones Adventure, Rise of the Resistance, and the dark rides of Fantasyland.

TPM: Some rides, like the King Kong Encounter at Universal Studios Hollywood (now King Kong 360 3D), have replaced animatronics with video. How do you feel about this trend and what part do you see animatronics playing in the future of themed experiences?

David: Animatronics have been making a comeback! At Universal Studios Hollywood the two newest experiences are the updated Jurassic World and The Secret Life of Pets, both of which are animatronic heavy. Although there is more flexibility with media, to me, a screen or projection does not have the same impact as something that is physically present with guests. I do like projections and screens for more ethereal or distant elements that add to the experience, like the sky, magic components, or background characters. At the end of the day, both video and physical animatronics are tools that have advantages and disadvantages. As with all art, different mediums have the power to evoke different responses from guests.

TPM: In addition to doing work for big theme parks, you’ve also worked on some personal projects, like a Nutcrackerland Attraction Concept. What is the purpose of these personal projects? Practice? To show your work? For eventual development?

David: All of the above. I’m unable to share the bulk of my professional work and behind-the-scenes magic due to non-disclosure agreements. Working on personal projects is a great way to sharpen my skills while being able to share my process with the world from inspiration to launch. 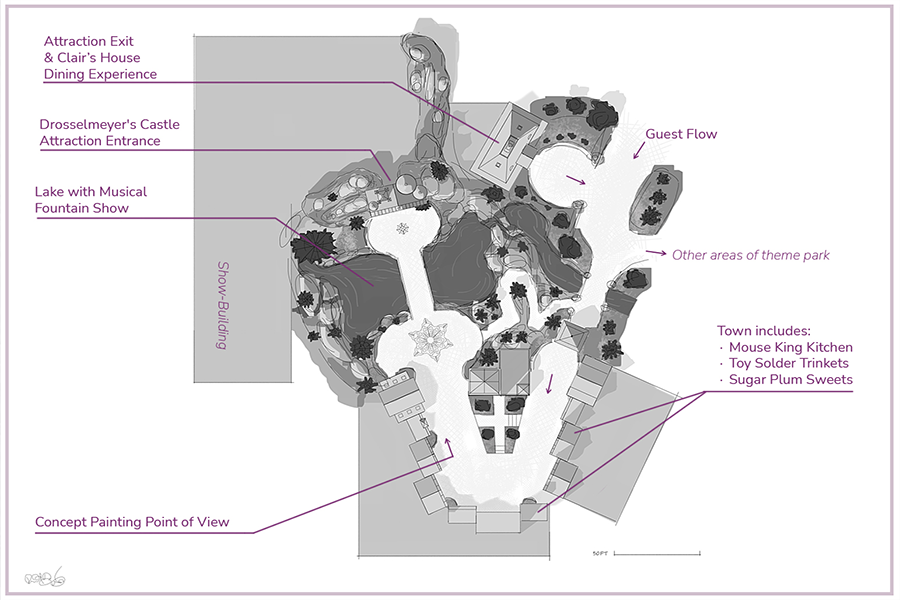 TPM: You have a background in theater and as an opera singer. How has that experience given you skills that have aided your journey so far?

David: Working in live theater and opera has taught me a lot about drama and teamwork. When I’m thinking about how to stage a scene in a themed experience I often think back to blocking a scene in the theater and how to have the most dramatic impact.

TPM: Your most recent project was working with Walt Disney Imagineering on Snow White’s Enchanted Wish. Tell us some of the things you did for the ride, what you learned, and what you’re most proud of.

David: Snow White’s Enchanted Wish was a dream project. I got to work alongside my mentors on everything from set design, special effects development, fabrication, to providing project art direction. I initially pitched the concept for the project back when I was an intern. It all started with a wild dream and a couple of small models: glittering mine jewels and the finale when Snow White awakens. With the push of a button music played and the forest erupted with magic as Snow White wakes from her sleeping death. The Anaheim team loved the idea and we developed the project further during my internship. Later on, I worked as an associate special effects designer, but we were a small team and all wore many hats. It was fantastic to be able to collaborate on so many different aspects of the project. 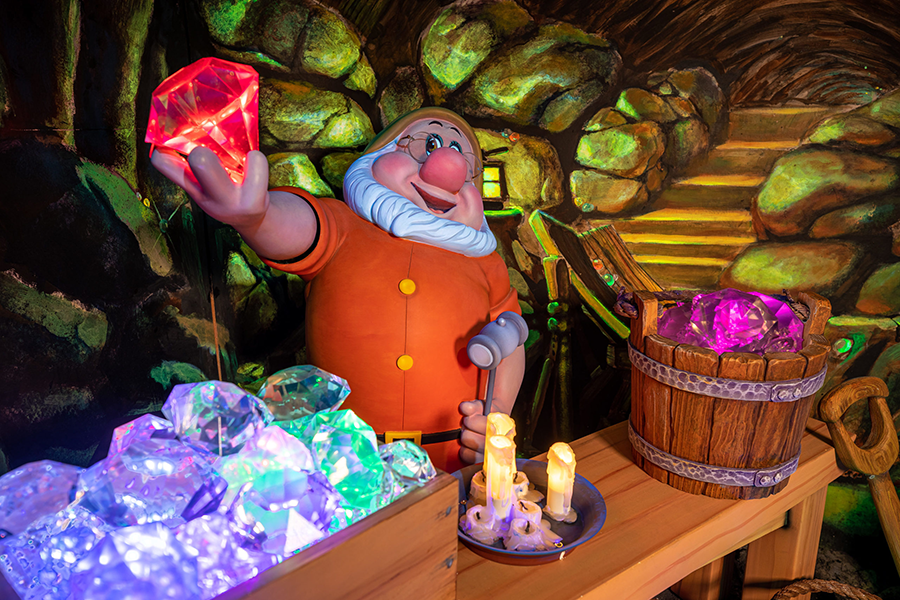 I’m so proud of the fact that we were able to create such an emotionally moving experience with a short ride within a limited space. Way back in 1937 when America was emerging from The Great Depression, Snow White and the Seven Dwarfs was the first animated feature film to elicit both laughter and tears from audiences. The thought that this updated attraction is able to evoke those same emotions during such a transformative moment in our history is exceptionally meaningful. Witnessing guests cry tears of joy after experiencing the ride on opening day was more than I could have hoped for.

I was also moved to discover that the team had included a subtle tribute to me within the ride itself. This means so much to me and I still can’t quite believe it. The ability to craft immersive experiences with such amazing and supportive people is truly an honor.

David: Being out in nature, hiking and camping. Music in general. My favorite musical theater and opera composers include Sondheim, Verdi, Wagner, and Puccini. Film composers: John Williams and Danny Elfman. I am inspired by lots of films: Disney animated features, Back to The Future, E.T, Star Wars, Willy Wonka and The Chocolate Factory, Studio Ghibli. Shakespeare’s plays. Growing up, the works of Roald Dahl and C.S. Lewis had a big impact on me.

TPM: If you were given unlimited financing to build your own theme park, what would it be like and what would make it unique?

David: Great question and obviously one I’ve thought a lot about! My park would center around one grand story told through the medium of the theme park. The characters would be fantastical creatures, think something along the lines of The Dark Crystal. I have always been a huge fan of Jim Henson and puppetry and I feel that fantastical non-human characters have the potential to be just as compelling, and are one of the best uses of animatronics.

Music would play a major role in the park and how the story is experienced. You can present a sweeping emotional narrative in a short amount of time through music. Combine that sense of movement in the music with guests physically moving through the story and that is where the real magic happens. My favorite attractions have always had a strong musical element, E.T. Adventure, Haunted Mansion, etc. Years ago I wanted to learn to compose for the sole purpose of making music for a park like this or other themed attractions.

“You can present a sweeping emotional narrative in a short amount of time through music.”
David Borning

Like many great parks, my theme park would have a strong connection to nature and feature grand outdoor spaces with real plants and trees, rockwork, and water features.

Overall, it would both be deeply dramatic but also fun and lighthearted. Fluffy and whimsical but with deeper meaning underneath reflecting the human condition. Each attraction and show would be subplots, part of a larger hero’s journey, designed to be consumed in any order. Somewhere you’d want to visit many times. Riding the line between high art and entertainment, which is where I like to live.

TPM: Thank you so much, David, for having this conversation with us about the theme park industry. We appreciate the insight and ideas you’ve shared.

For people interested in the themed entertainment industry, David recommends they check out the Themed Entertainment Association. You can visit David’s Website at davidborning.com.