June 15, 2021, marks the 20th anniversary of the Disney animated movie Atlantis: The Lost Empire. The movie follows a team of explorers to the lost city of Atlantis where they unexpectedly find themselves in a battle to help save the city.

In conjunction with the movie’s release, Disney Special Events and Walt Disney Imagineers constructed an elaborate interactive exhibit in the building next to the Disney-owned El Capitan Theatre in Hollywood. Called Destination Atlantis, the immersive experience gave the public a deeper dive into the movie. 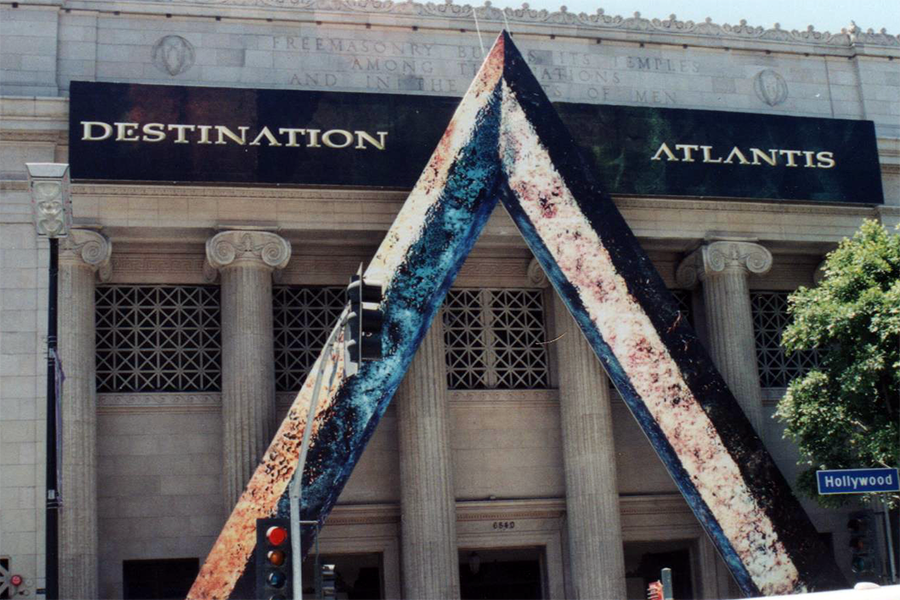 After watching Atlantis: The Lost Empire at the historic El Capitan Theatre (across from Mann’s Chinese Theater), guests went next door to Destination Atlantis. The journey encompassed three floors:

The Atlantean-themed aquariums contained sea life on loan from the Aquarium of the Pacific in Long Beach, California. It included creatures such as lionfish, leopard sharks, Port Jackson sharks, catsharks, jellyfish, sea horses, and sea apples. 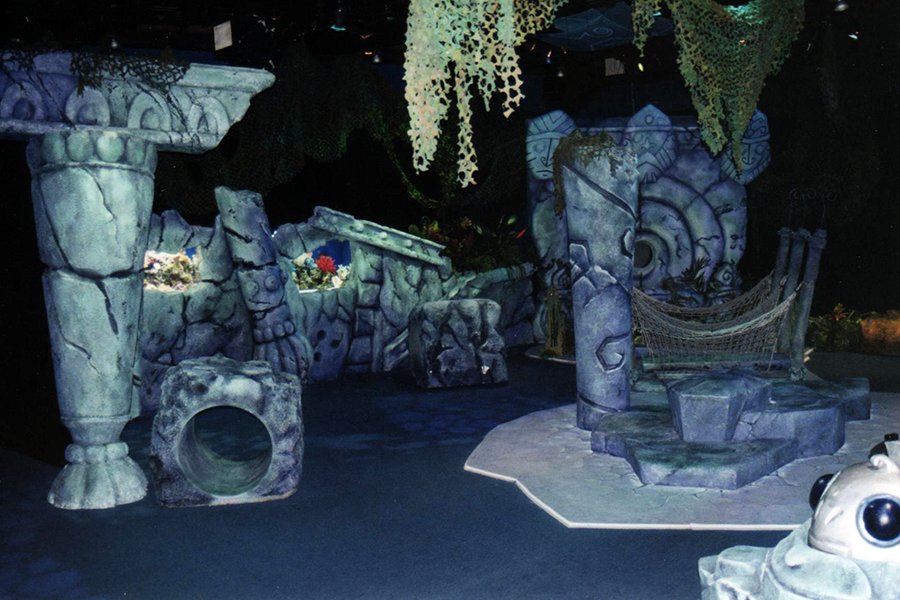 The interactive area called The Vortex allowed guests to interact with sea life, pilot an Atlantean Ketak, play a PC Atlantis game, or try their luck at an aquatic stepping stone obstacle course.

The Whitmore Library is where guests could see movie exhibits that inspired the animators when making Atlantis: The Lost Empire. Each character had their own display area filled with props, sketches, and furniture that inspired the character’s backstory and development.

The centerpiece in the Whitmore Library was a large model of the Ulysses that was designed by Matt Codd, with technical design details by Jim Martin. The model was created by Greg Aronowitz. The model was used to create the digital version of the ship that was used in the action scenes of the movie. 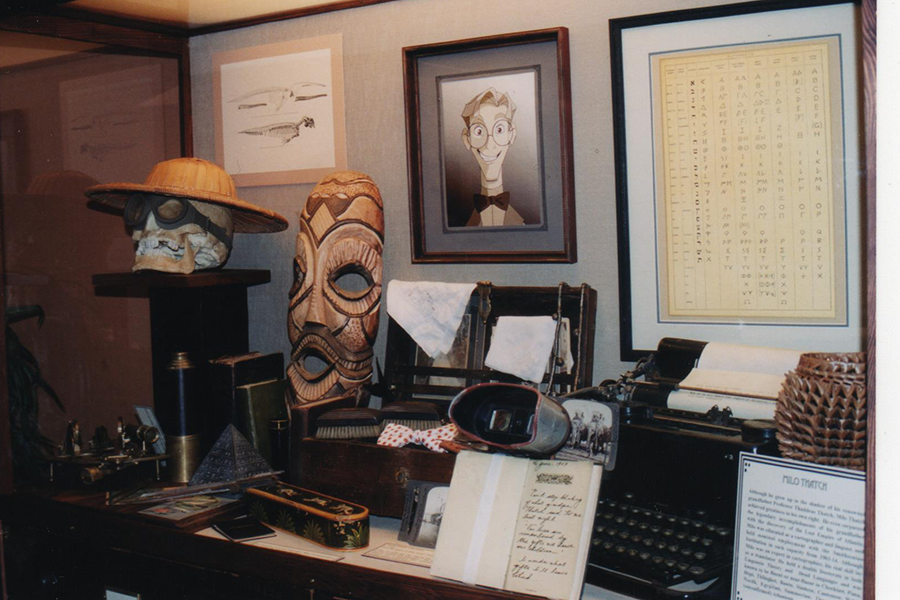 THE SURFACE (upper floor). This elaborately decorated area was dedicated completely to laser tag. For this unique version of laser tag, guests navigated an undersea maze while trying to fight their way to the surface.

The game began in the briefing room. Groups of 20 people were divided into two groups of 10: a Red team and a Green team. Warriors watched a training video with a battle briefing and then suited up for battle.

The laser tag game commenced in a dark, fog-filled, Atlantean-themed undersea maze with dramatic music playing throughout the arena. 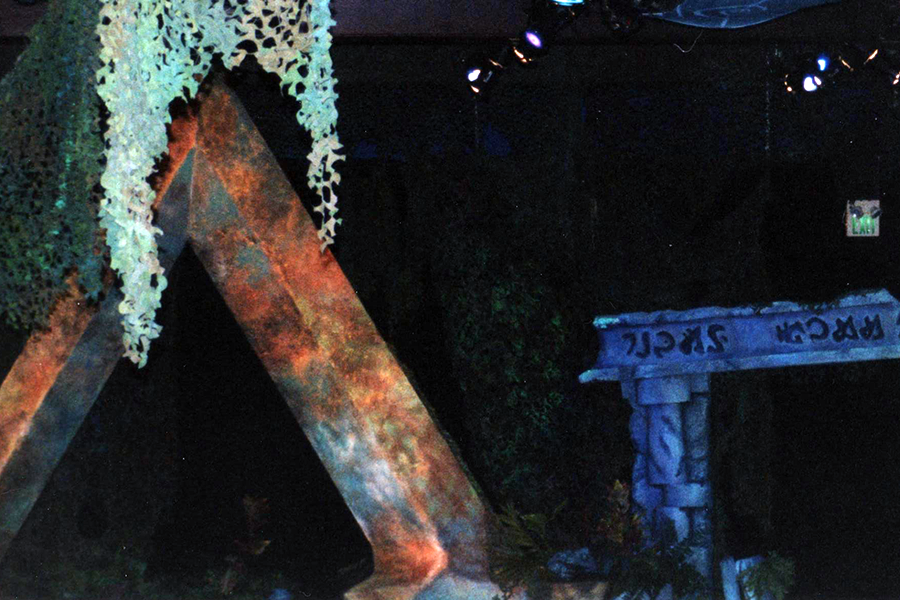 THE OCEAN DEPTHS (lower floor). This area focused on “deep sea activities,” including making a crystal necklace, digging for shark teeth, deciphering the Atlantean language, and building an earthquake-resistant Atlantis. In addition, guests could take a blank sheet of paper and rub them against image plates to create the impression of a scene from the movie.

The entire experience was immersive, family-friendly, and accessible.

From Movies to Themed Experiences

Destination Atlantis took Walt Disney Imagineering and Disney Special Events more than six months to plan and construct. But it wasn’t the first elaborately themed experience. The first movie-themed attraction coordinated with a movie opening at the El Capitan began with Toy Story in 1995. A new event would take place annually.

Prior to Destination Atlantis, Walt Disney Imagineers and Disney Special Events built an elaborate attraction for its animated Dinosaur movie. While these massive sets and themed areas took more than half a year to build, they would only be available to the public for only about six weeks. Then planning for the next exhibit would begin.

And the cost for the movie and experience in 2001? $13. But for the public lucky enough to have the chance to be immersed in a Disney movie, the experience was priceless.

Interesting Fact: Did you know that the submarine ride at Disneyland was going to be rethemed to Atlantis (after the movie)? Unfortunately, Atlantis: The Lost Empire didn’t do as well as Disney had hoped at the box office and a few months after its release was 9/11 which had a big effect on tourism and theme park attendance. The plan was scrapped.

Behind the Attraction to Fill Void Left by The Imagineering Story