Attraction creator Pursuit has opened a new immersive “flying” ride in Las Vegas – FlyOver. The flight simulation ride suspends riders in front of an immersive 52.5-foot-wide spherical screen and takes them on a nine-minute journey through massive landscapes.

The FlyOver experience begins with guests being lined up in front of a large screen that plays different panoramic scenes. Guests are then taken into a circular room with a hanging round video screen in the middle and large panoramic screens nearly surrounding the rest of the room. The videos that play in this room are more educational in nature, providing guests with historic insight into the topic of the ride. The preshow experience was created by Moment Factory, an immersive entertainment multimedia production house. 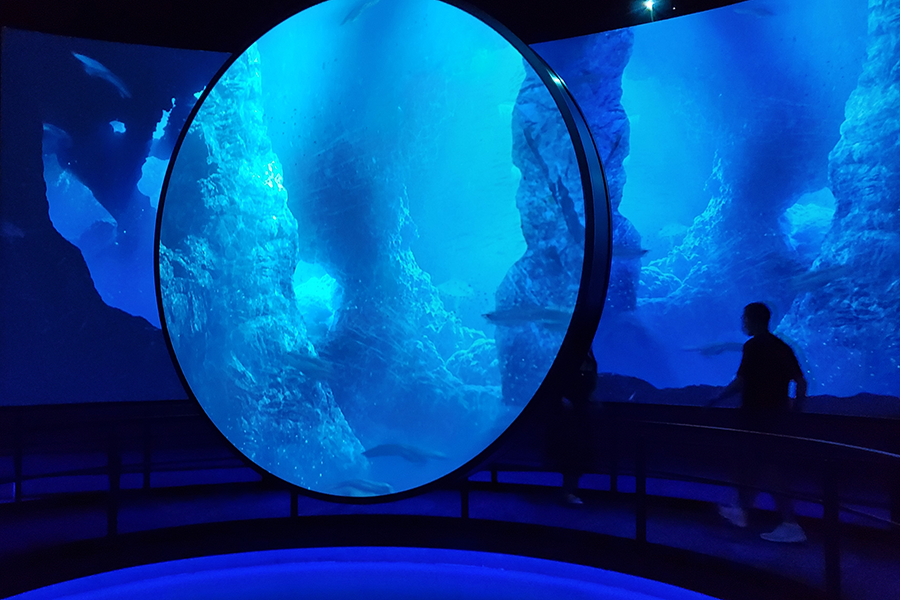 Preshow area. There is a hanging round screen and panoramic background video screens. Video can also play under the round screen in the middle of the room. (picture by Theme Park Magazine)

After the pre-show, guests enter the ride chamber and board the flight motion vehicle. After buckling in, the lights go out and the motion vehicle moves guests in front of the 52.5-foot wrap-around screen where the journey begins with 8K HD footage specially shot for the experience.

The ride portion of FlyOver lasts for nine minutes. Guests are immersed in the experience as the motion simulator matches movements on the screen for a smooth adventure. The immersive nature of the ride extends to wind, mists, smells, and additional lighting effects. 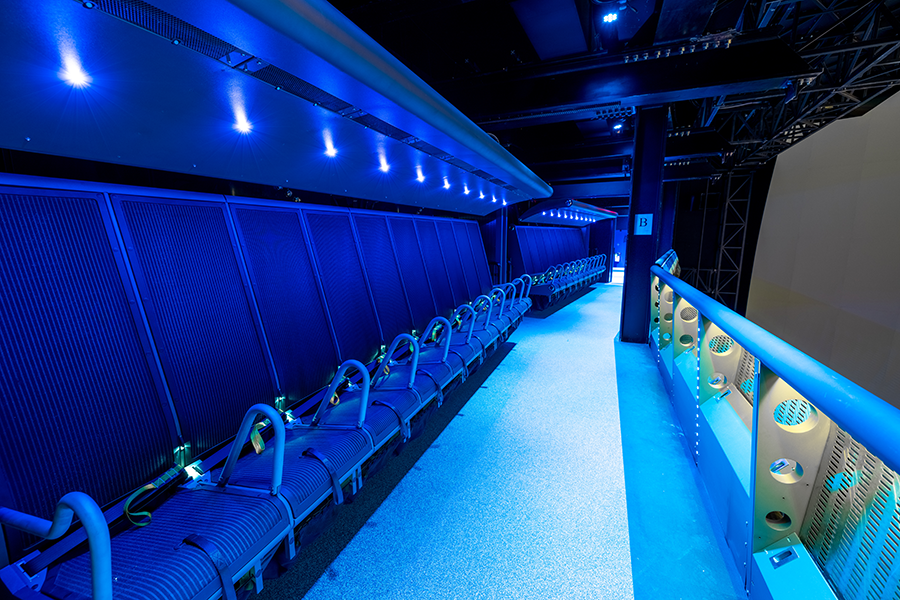 “The immersive nature of this experience is something The Strip has never seen before,” says Vice President of FlyOver Attractions, Lisa Adams.

The entire experience from preshow through the ride lasts for about 24 minutes. When guests exit, they are taken by the ride control room where they can see ride controllers at work.

Part of the Control Room that guests see after they exit the ride. (picture by Theme Park Magazine)

FlyOver experiences are made to be rotated so guests can experience something different every time they visit Las Vegas or other FlyOver locations. The cost is $24 for children and $34 for adults.

The main attraction at FlyOver Las Vegas is The Real Wild West. Not to be confused with the 1800s Wild West, this adventure takes people on a modern-day journey of beautiful areas in American West states like Nevada, California, Utah, Colorado, Oregon, Wyoming, Arizona, and New Mexico.

Some of the scenes in The Real Wild West include:

There are 22 destinations shown in the nine-minute adventure. The custom music score for The Real Wild West was created by GRAMMY-nominated composer Tom Hokenborg.

Las Vegas is the third location for FlyOver. The other two are FlyOver Canada and Flyover Iceland. In 2022, Pursuit will open FlyOver Toronto.

FlyOver Las Vegas opened on September 1 with two adventures: The Real Wild West (see the trailer in Resources below) and Iceland. FlyOver Iceland opened in 2019 and the original FlyOver Canada opened in 2013.

FlyOver Las Vegas is located on Las Vegas Blvd (the Strip) next to the Hard Rock Cafe.

Editor’s Note: We were in Las Vegas to cover the Immersive Industry Homecoming Summit at the end of August. We had wanted to cover FlyOver too, but it wasn’t slated to open until the day after we were leaving Las Vegas. As luck would have it, on our final day we visited M&M World (a themed experience store) and as we were walking to the parking garage a person approached us and said they were previewing a new adventure in Vegas called “FlyOver” and would we like free tickets to experience it? It wasn’t a tough “sell.”