The second day launched with a large online panel of “all-stars.”

The first to speak at the virtual all-star panel from Singapore was Melinda Lauw of Whisperlodge. Whisperlodge is an immersive and intimate theater experience that the New York Times describes as, “an unusual mixture of theater and therapy.” Whisperlodge refers to itself as an ASMR “immersive spa for the senses.”

Lauw says that there is plenty of room for growth for the immersive industry in Singapore.

Lauw was followed by Aruna Ganesh Ram, artistic director of Visual Respiration, who discussed her work in immersive performances in India and the popularity of escape rooms. 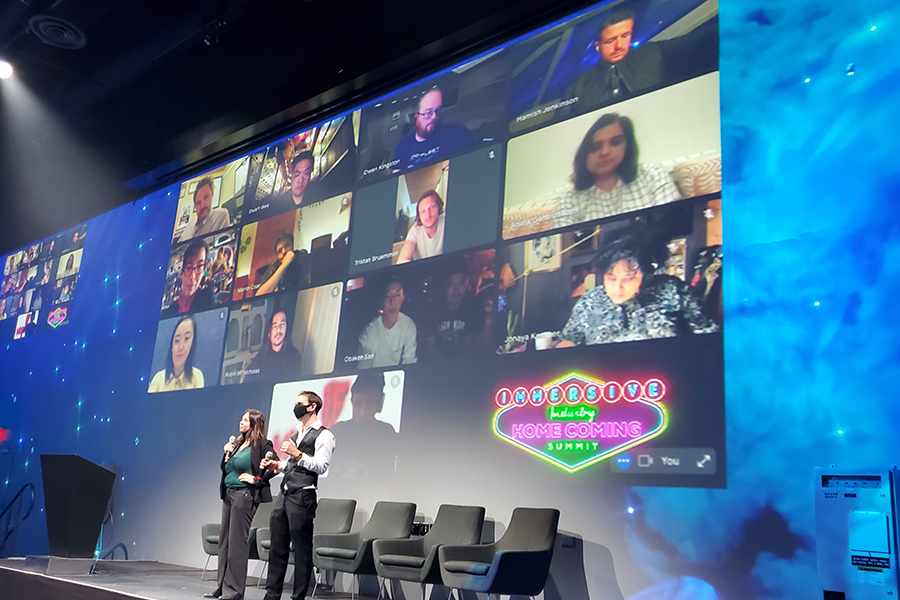 Next up was Stuart Lee, co-founding director of ANDSOFORTH. Lee is known for creating elaborate sets for immersive dining experiences. He has built an airplane so that guests could experience first-class, and he designed content for a 20,000 square foot empty space, creating 22 rooms and managed a crew of 40 including actors, lighting programmers, animators, and sound designers.

“One thing that binds us as a people is food,” said Lee.

“We’re bringing a light-saber experience unlike anything like you’ve experienced before,” said Thatcher. Another thing she is excited about is how the decisions people make during the experience will affect the story as the experience progresses, even down to selling someone out.

Next to speak was Martin Coat of Dank Parish. Dank Parish’s closest partner is Boomtown Fair, a music festival built like a movie set without tents or stages. Coat told the summit Boomtown hosts more than 70,000 guests over the period of 5 days, and that 1000 actors can be participating at one time. Boomtown has been telling an immersive story over the course of 10 years, with missions set each year for fairgoers to complete.

Next, artistic director Owen Kingston of Parabolic Theatre made the case for interactive performances that gives the audience unlimited choices.

Hamish Jenkinson, co-founder and executive creative director of The Department in London, has worked with Secret Cinema and Meow Wolf. Jenkinson was recently granted permission to create a new immersive experience based on a completely new story set in the DC Universe. When discussing the current COVID uncertainties, he said that “immersive creatives have managed to pivot” and are being shaped by videogame developers.

On that topic, James Seager of Les Enfants Terrible says he has been asked to speak at video game conferences since 2016. Seeger says that immersive experiences and video games are “intrinsically linked.” Seager gave the example of converting the immersive theater production of The Game’s Afoot to an online experience compatible with Zoom.

Robin McNicholas of Marshmallow Laser Feast, when discussing the innovations in the immersive industry, was “excited for the new roles for the audience.”

Following that, Tristan Bruemmer of the French Association of Immersive Artists talked about helping conventional artists transition, giving them the tools they need to survive in the current environment. He says the immersive industry is still new in France.

The team from Obeken joined the virtual panel from Japan. They specialize in haunted houses and have pivoted to some virtual experiences this past year. They think it’s important to offer all sides of the story.

The panel discussion concluded with Jonaya Kemper from Carnegie Melon University. Kemper studies live-action role-playing (LARP) and what happens to people when they participate in LARP. She talked about some impactful LARP experiences that are rooted in social and political space, such Just a Little Lovin’ about the AIDS crisis and Avalon LARP Studio’s The Quota. “LARP is a transition of space.”

When emcee Steve Boyle asked the participants what advice they would give to aspiring immersives, the panel offered the following:

• Seager: “Surround yourself with like-minded people.”
• Thatcher: “Ambition will always outweigh your ability, funding. Start with the smallest kernel that will be amazing; that is your secret to success.”
• Jenkinson: “Start small.”
• Coat: “If you can see it in your mind’s eye, you can achieve it. If you’re not having fun, you’re doing it wrong. Make discoveries, not decisions.”
• Kemper: “Redefine the term immersive. It doesn’t have to be perfect, it’s about what the audience feels.”
• McNicholas: “It’s the story; Don’t get distracted about the technologies.”

A Conversation with Swamp Motel 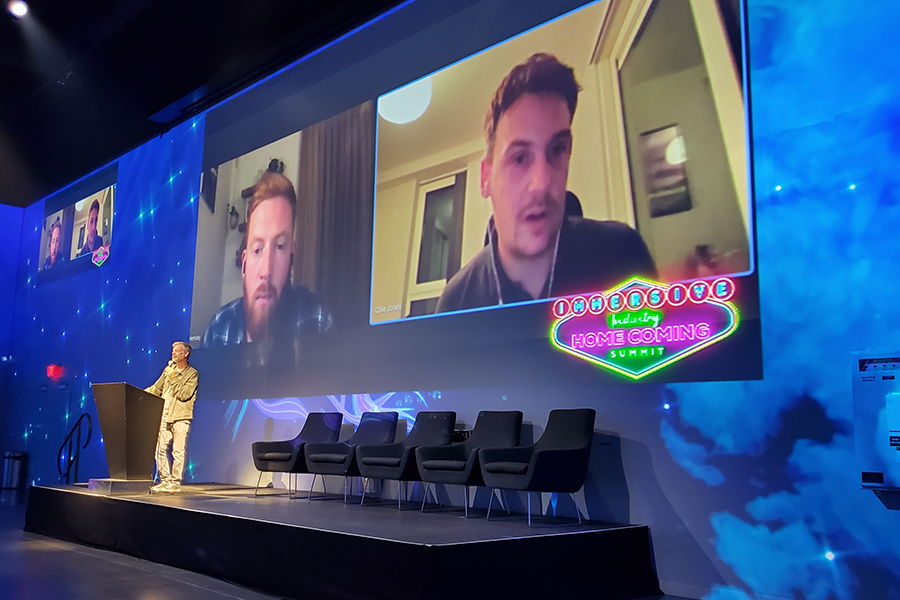 According to Hemsley, one thing they learned was that cell phones can enhance the experience. “The audience can use their own intuition to move through the story.” In a common theme of the day, Jones talked about how theater and gaming are moving closer.

Introducing the term “phygital,” the combination of the physical and digital world, Natalia Skibenko presented the immersive spaces designed by Hello I/O. It provides experiences that encourage children to use their gross motor skills to interact in digitally enhanced spaces. 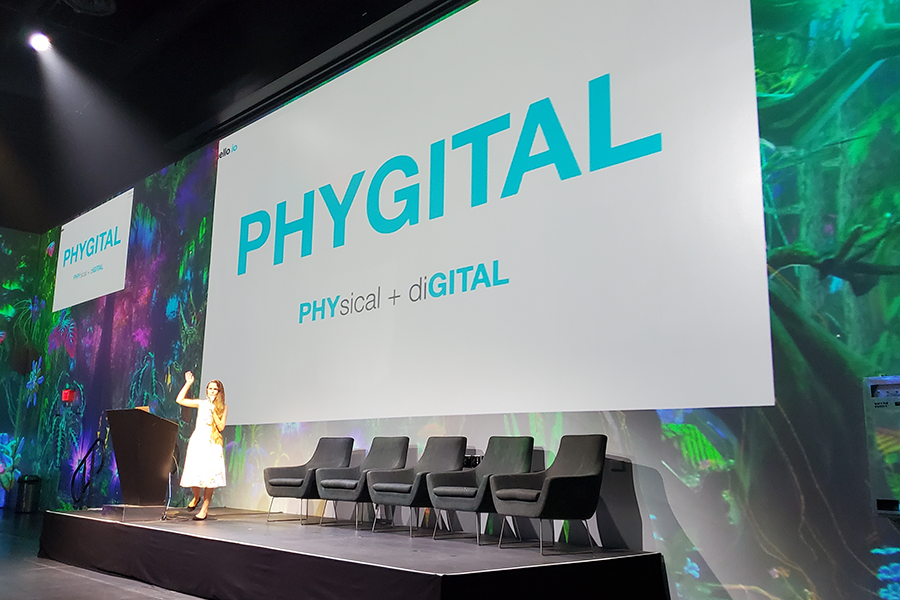 “Immersive can and should be educational as well. Educational doesn’t have to be boring,” said Skibenko.

According to Skibenko, a perk to offering these experiences digitally is the opportunity to present different worlds in one package with the same budget.

“Hello I/O is very new to the American market,” Skibenko told Theme Park Magazine after the event. “So events like this are kind of like a litmus test for us. America has the best theme parks in the world so the bar is very high for expectations and quality. But at the same time, hi-tech entertainment, and phygital in particular, are not very popular yet, so we are happy to see that local leading professionals are very open to this new trend as we got multiple connections that are ready to take part in its development.”

Andrew Scoville, director of Theatre of the Mind in Denver, was joined virtually by producers Nate Koch and Charlie Miller. Exploring perception and neuroscience, Scoville explained that science is used for source material and to guide decision-making.

Theatre of the Mind takes place in a 15,000 square foot space with one actor guiding 16 audience members through a series of environments.

Next up was the CEO of Lost Spirits Distillery, Bryan Davis. He developed a patented process of aging spirits without the use of barrels. So, when it was time to open a distillery to the public, the question was, “What do you use to replace the barrel rooms?” Davis’ idea was to build a themed environment for each spirit, taking inspiration from The Island of Dr. Moreau.
One of the things Davis emphasizes was that he and his partner learned how to engineer their own systems in the beginning; it was completely DIY.

Jon Braver introduced the trailer for his newest project produced in partnership with 13th Floor Entertainment Group. The interactive and immersive horror production is scheduled this fall in the Phillips Mansion in Pomona, California. Here’s the trailer:

Author of The End of Storytelling Stephanie Riggs announced a new pilot program through Odeon Theatrical. It offers expanded reality (XR) consulting and development, with optional ticketing and marketing support, to existing shows. Riggs said that it will help produce performances in a “real-world venue without the real-world constraints.”

The mega panel featured all in-person speakers who gathered together on the stage to answer questions from the audience. 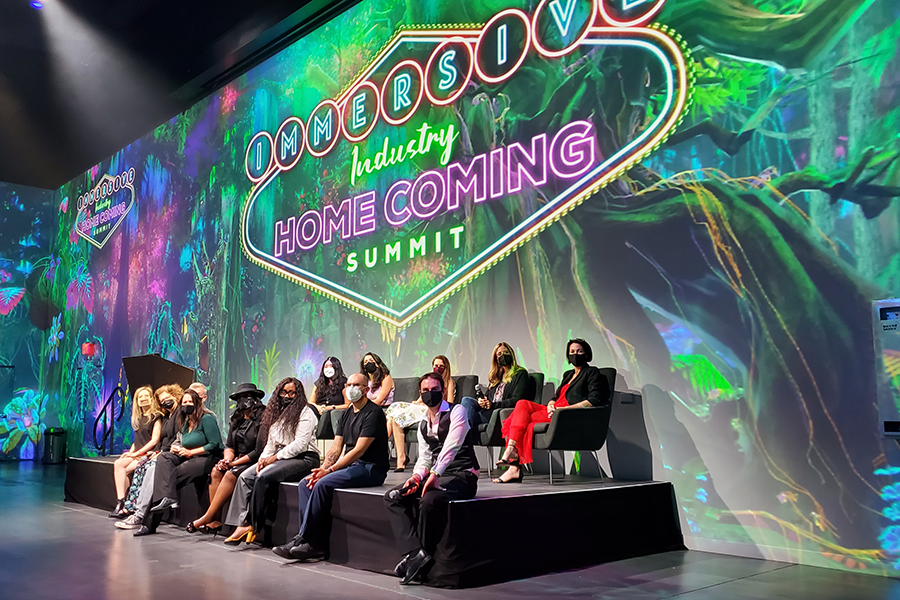 Panel of speakers answer questions from the audience. (photo by Theme Park Magazine)

One of the questions asked was whether anyone was ever given advice they ignored and it was good that they ignored it?

Kim Adams of Adventure Lab commented that if anyone ever tells you your idea is too crazy or not possible, don’t listen to them. Even if you fail with your idea you will gain valuable experience in the process.

Charlie Billingsley of the Museum for Black Girls (see next section) said that due to several factors – including COVID – they had to move three times. They were told not to move because being in the same location helps people find them. But they moved anyway and they have had the most success at their third location.

The summit concluded with keynote speakers Charlie Billingsley and Von Ross from the Museum for Black Girls. Billingsley initially thought of the idea of a space where black women are celebrated as a birthday present to herself.  The Museum for Black Girls is an entirely self-funded and grass roots venture that has grown immensely in its short existence. It is located in Denver, Colorado.

The Museum for Black Girls is a highly personalized experience. Guests are given personal tours, allowing them to become immersed in their emotions. At the start of the tour, guests are encouraged to look into a mirror and describe what they see. They are encouraged to witness the beauty and potential that they possess.

The 12 exhibits include an affirmation room, a kitchen scene depicting common hairstyling tools used by black women, and art installations celebrating black women and their experiences. Everything must be intentional, immersive, impactful, and interactive. Billingsley and Ross, who work with black girl artists, strive to push the boundaries of their amazing creations.

Here is Von Ross talking about some of the artist-created rooms in The Museum for Black Girls:

Many things in the museum were built or acquired by Billingsley and Ross; this meant they learned how to build walls. “Start where you are. Start with what you have,” said Ross. “Always be a student.”

• The Immersive Industry Homecoming Summit took a lot of work to pull off, and, despite a small delay at check-in, it was well executed.

• The summit was extremely heavy on theatre. We feel there could be a benefit to including other areas like immersive rides, escape rooms, and themed hotels.

• The summit provided excellent opportunities for people to connect with get-togethers after each day’s presentations. The second night was held at the themed bar The Golden Tiki, a perfect immersive environment for people to gather.

• In between segments, videos were shown about immersive projects from around the world.

• This wasn’t an easy feat to organize, especially with the Delta variant of COVID spreading. We commend Epic Immersive for the excellent job they did. In order to get in, guests had to show proof of vaccination (or a negative COVID test) and wear masks while indoors.