The Immersive Industry Homecoming Summit completed its first day on Sunday. The event started with opening remarks from the producer of the event, Steve Boyle. It was followed by a short allegorical story to center the audience and prepare them for the event by Meow Wolf’s Laika Young.

The Pulse of the Industry

The first session was The Pulse of the Industry featuring talks by Impact Museum’s Jenny Weinbloom followed by Mycotoo’s Fri Forjindam.

Referencing the pandemic, Weinbloom stated, “We were heavily heavily hit over the last year and a half.” But she pointed out that the industry prevailed and adapted extremely well to change, referencing innovations like online immersive experiences and drive-thru experiences.

Weinbloom stated that immersive experiences do not have to compete with each other as there is room for all of them. She talked about how Impact Museum did the original Van Gogh immersive experience (Immersive Van Gogh Exhibition) and now there are several other ones, including the one in the space the summit is being held at. She says that is great as there is more than enough room for all of them.

Mycotoo’s Forjindam was next up. She walked the audience through the process of imagining a historical immersive experience called America 2050: The Experience. Steps she related include: 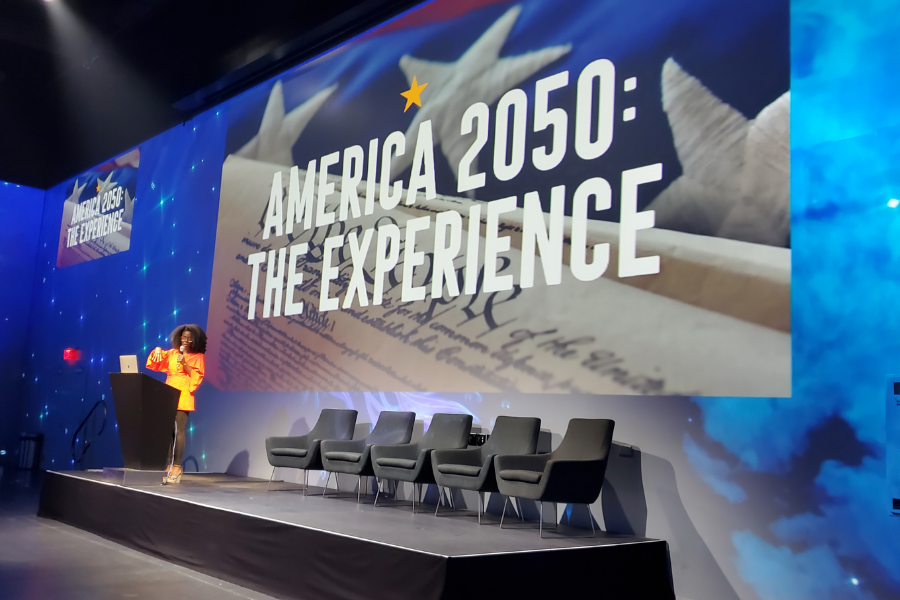 Fri Forjindam and her America 2050: The Experience Example

Forjindam emphasized creating an authentic story using multiple points of view. Bringing more people to the table helps create these opportunities. To make the point, she referenced the January 6 Capitol riots and how there were many aspects to the story, such as the capitol police officer who redirected the rioters in an effort to protect congresspersons or the workers who cleaned up the broken shards of glass afterward.

Moccia was up first talking about the incredible success and journey of one of the UK’s most popular immersive experiences – Secret Cinema. Secret Cinema takes intellectual properties, mostly movies, and expands them into the physical environment. This includes using actors, massive set designs, and props, some authentic to the actual films. One of the most popular events was Star Wars: The Empire Strikes Back. Here’s the trailer that Moccia showed at the summit:

Moccia said that at each event they remove the cell phones from guests to encourage interaction. Secret Cinema themes its queues to envelope guests into the experience immediately upon arrival. And, during the event, much of the action seen on screen is performed live.

According to Moccia, the goal of Secret Cinema is for a guest to attend one of the company’s events and leave saying “this was the best day of my life.”

Secret Cinema was one of the producers behind the wildly popular Stranger Things Drive Thru event last year in Los Angeles. It is the company’s first foray into the United States. There will be more to come.

“Our fans are at the heart of what we do,” said Moccia.

Beneville talked about the history of Area15 and provided a technology demonstration in the space that currently houses Van Gogh: The Immersive Experience. Here’s a short look at that segment:

Beneville stated that his co-founders purchased 90 acres that Area15 sits on, leaving room for future expansion. Upcoming experiences include Illuminarium, R15e, and Vegas Rising. There are also plans to take the Area15 concept to other cities.

“A long time ago this was just an empty parking lot,” said Beneville. “And that’s kind of where dreamers and entertainers get their best opportunity, I think.”

Beneville says that there are three things that AREA15 is looking for in potential tenants:

Even if a company can only meet two of those three requirements, AREA15 is willing to work with them.

The Future of Theatre

The Future of Theatre delved into how theatre is evolving into a more immersive, and many times digitized, experience. The push into the virtual space was accelerated by the worldwide COVID-19 pandemic. 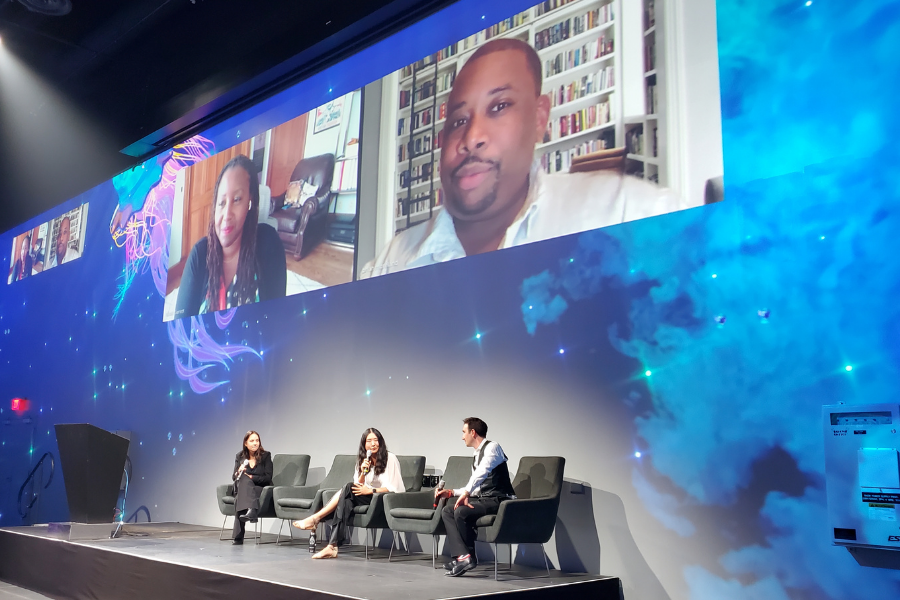 Scarlett Kim (in person) along with Nataki Garrett, and Brian Moreland (virtually)

The theatre panel featured Scarlett Kim (in person) along with Nataki Garrett, and Brian Moreland (virtually). Kim and Garrett are from the Oregon Shakespeare Festival and Brian Moreland is a Broadway producer. Some of the points from this panel included:

Moreland said that “2020 was a horrid year worldwide,” but the one consistent was the art of storytelling. He compared theatre to a virus saying “it is constantly changing in order to survive.”

XR with Live Actors (XR=Extended Reality) delved more into virtual digital acting in immersive environments. This segment included talks from the team behind The Severence Theory: Welcome to Respite and a talk by Adventure Lab’s Kim Adams. 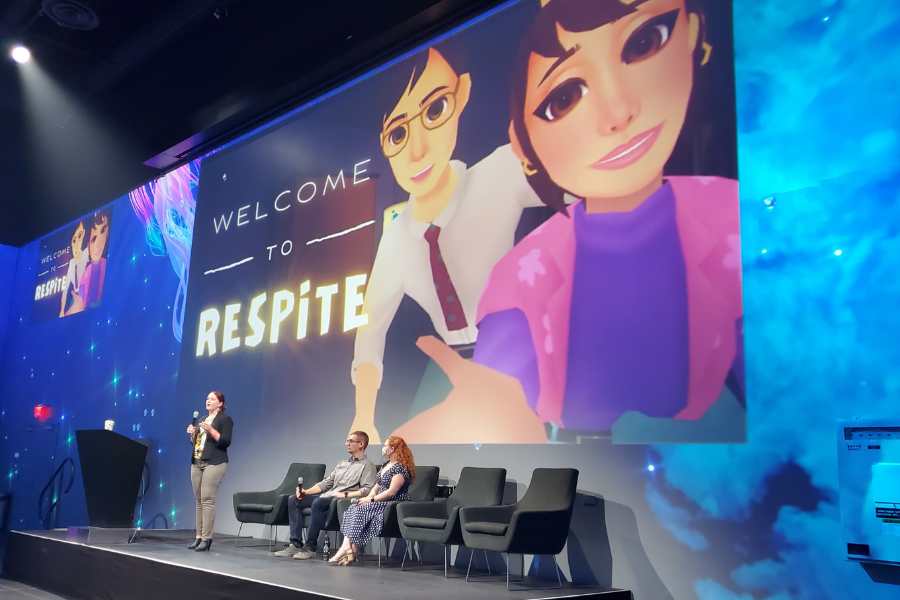 The segment started with three members behind The Severance Theory: Welcome to Respite, a collaboration by CoAct Productions and the Ferryman Collective. Described as “where virtual reality meets live performance,” Welcome to Respite was originally imagined as an in-person, intimate theater production that had a few runs before shutting down due to COVID-19 restrictions. Live actors now work in virtual sets as avatars, with the audience member participating in the production as an avatar, using VR headsets. The challenges of moving the venue to a virtual space included learning new ways to stage design and the instructing (onboarding) of actors and audiences on the use of the technology.

The emergence of COVID-19 and the growth of VR headsets made it a good time for productions to move to VR and XR.

The Welcome to Respite team sees their virtual reality work as a mix between Immersive theatre, cinema, and game design.

Next up was Adams from Adventure Lab which “makes virtual adventures hosted by live actors.”

Here’s how the Adventure Lab Website describes their experiences:

“It’s like an escape room, role-playing game, and immersive performance all in one unique social experience you can enjoy from home.” 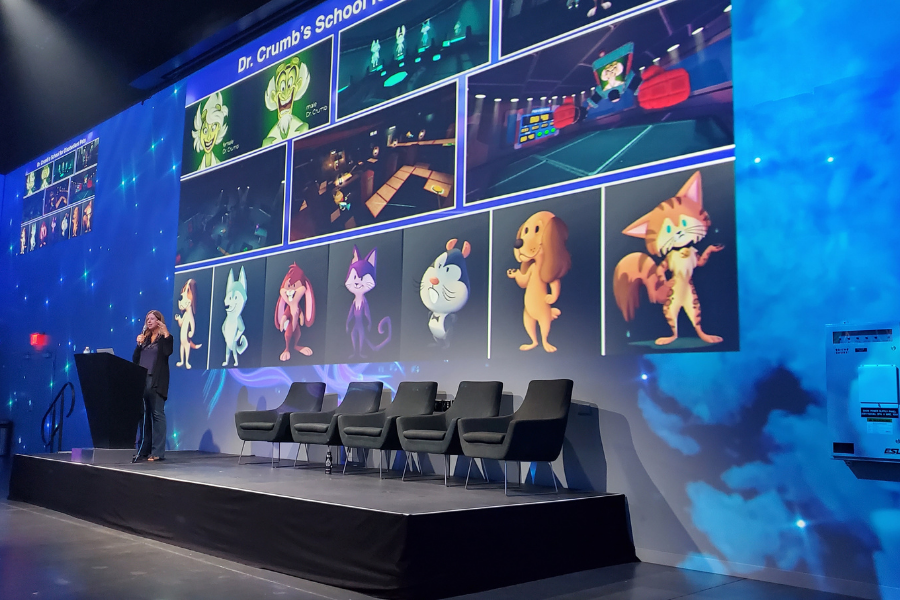 Adams stresses the importance of easy-to-understand onboarding because “we notice people don’t read and they don’t listen.” Not only must instructions be simple, but they must also be repeated several times.

According to Adams, when people enter the virtual space they want to be seen, heard, and made to feel special. It’s important to provide the audience with a sense of safety and playfulness. Furthermore, actors should avoid any negativeness as it can quickly kill the experience or vibe.

The last session for the day was Experiential Empathy with presentations by Meow Wolf’s Lead Experience Designer Laika Young and Mikhael Tara Garver, founder of 13EXP.

Master storyteller Young says that at Meow Wolf they are “intentional about everything.” One of the biggest challenges for guests is to enter Meow Wolf without directions, which is intentional. Yet guests want information on where to start and how to proceed so they can see everything.

“The magic we are after is what people are able to make from the experience itself,” said Young.

Young says that each installation has tons of narrative items throughout the exhibit, creating many ways for a person to discover the story.

Some RFID card-activated devices (mostly video) were added to Meow Wolf Omega Mart displays in Las Vegas. As an experiment, Meow Wolf employees would hand a card to a guest who seemed confused or bored. Here’s Young telling the rest of the story…

Omega Mart now gives cards to everyone as they enter and it has become a major part of the experience.

A project she has been working on for 10 years is PostNation, an immersive, experiential entertainment production. PostNation will include a documentary series, a kids’ musical podcast, and a series of installations in different post offices around the country, all focused on the purpose of the U.S. Postal Service.

Garver is also working as The Immersive Experiences Director for the Star Wars: Galactic Starcruiser experience at Walt Disney World.

Wink World Fitting in at Area15